Although lightning strikes are not common for horses, this gelding and 5 of his stable mates were struck by lightning while they were in their stable. It was obviously not a direct hit, as the odds of survival are much lower.

The horse suffered severe neurological damage and other traumatic injuries.

He was deaf, blind, and recumbent from the beginning.

He sustained damage to his vestibular system, which is responsible to maintain the normal orientation of the trunk and limbs as well as the movement and position of the head.

Radiographs were taken of the head to rule out fractures that could cause similar clinical signs.

Although loss of consciousness can last for several minutes or hours, some horses may not regain their consciousness. Other signs and symptoms include vestibular dysfunction (facial nerve paralysis), depression, haemorrhage from ears or nostrils, ataxia, and haemorrhage. A fracture of the petrous temporal bone can be indicated by leaking spinal fluid or hemorhage from the ears. A basisphenoid fracture can cause severe haemorrhage and can inflict the basilar artery.

Endoscopic examination and skull radiographs are available for diagnosis. These fractures are often very stable and can be hard to spot.

Blindfolding an animal will exacerbate all signs.

These were just a few of the unusual behaviors that this horse displayed:

– Variable Nystagmus: Horizontal, Rotatory, or Vertical (this is an abnormal eye movement in relation to head movements).

– Proprioceptive deficiencies general (non-aware of the position of the body or limbs).

– Head tilt away or towards the lesion (rare).

– Deafness is when the cochlear branch VIII of the cranial nerve VIII becomes involved bilaterally.

The cause of the neurological impairments will determine the prognosis. Blindfolding can help to clarify signs and allow animals with neurological deficits to return to normal functions.

Blindness can be caused by loss of vestibular compensation.

Facial and other cranial nerve deficiencies often persist with little improvement over time. Full function can be restored if there is even a slight improvement in facial nerve function within the first four months. 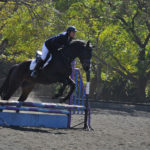 Remember to take extreme care when riding horses with vestibular diseases in low light conditions. This can make the horse more anxious or worsen the symptoms.

The horse was treated symptomatically, and he has been slowly recovering over the past 12 months. Although he still has mild vestibular symptoms, he is now a competent jumper.

I’m Allison, born and raised in San Diego California, the earliest memory I have with horses was at my grandfather’s farm. I used to sit at the stable as a kid and hang out with my Papa while he was training the horses. When I was invited to watch a horse riding competition, I got so fascinated with riding!